Why GSH is the Best Injectable Glutathione Brand?

Filipinas now-a-days are getting addicted to skin whitening products. Before, they were just using soaps and lotions, until capsules came. However, some women wanted a faster result, so they’ve decided to undergo IV drip. So what is an IV drip to those who aren’t familiar? According to Medicine.net.com, intravenous drip (IV) is a device for administering a fluid drop-by-drop into a vein via an intravenous (IV) route. IV Drip was just for an artist before, but since there were cheap Glutathione injectables that were sold in the market, it became a hype.
Since I was one of those women who wanted to have a fairer skin complexion, I’ve decided to make a blog and help my fellow women in choosing the best product for Gluta drip.

Glutax are popularly known in the market because of its cheap price. Before I used this product, I already had 5 session of gluta drip with 1200mg glutathione content from a famous hospital because my auntie was one of the doctors there. My consultation is free but the session is expensive though I have 50% discount. So I’ve decided to contact a friend of mine who knows someone that can do a gluta drip for an affordable price. The seller  gave me a package worth 6,500 for 12 sessions of Glutax 5gs.  I was so surprised because the content is 5000mg and I got it for a very cheap price. After 8 sessions of using Glutax 5gs, I saw minimal result. I was expecting a better and faster result since the content is 5,000mg. I asked the seller why the result isn’t noticeable compared to the 5 sessions that I had before.  So I’ve decided to conduct a background check regarding this product and most of the blog posts tell that it is fake. So I did more research and according to Pipac (Philippine Institute of Pure and Applied Chemistry), Glutax has only .25g or 250mg per vial. It’s not actually fake, it only has lesser content of glutathione giving false claims to the consumers. Another thing, this product is not really made in Italy but from China.

The moment that I’ve discovered the false claims of Glutax 5gs, I asked the supplier if she can change my injectables into Saluta. So what’s my reason why I choose Saluta. According to The Philippine Magazine, Ateneo Assay Test stated that Saluta is one of the products that have 100% glutathione. Though it was manufactured in China, this product is considered as legit. For a reasonable price of 1,900-2,100 pesos, you can purchase a box of 600mg of Saluta. You can inject 600mg every 3 days or for a faster result, you can double its dosage. During my first session, the nurse injected 2 vials of 600mg of Saluta Glutathione and 1 500mg of vitamin C. I was amazed because I didn't expect my complexion will get a little bit lighter. After I finished my first box, I saw an improvement, and of course way much better than the result that Glutax 5gs gave me. However, I didn't achieve the glow that I want. It gave me a pale white complexion. I'm looking for a blooming effect.

While I was having a background check for Glutax, I  accidentally clicked Magic Potions website. It gave me some information about fake glutathione and at the same time it introduced me to a brand that is made from France, the GSH Lumineux. GSH Lumineux is a glutathione injectable made by Laboratoires Biopharmacie S.A. in Paris, France. I checked their Instagram account and I saw two GSH, the one with 600mg for Php 3,000 and 1, 200mg for Php 4,500. They sent me a box of 600mg GSH Lumineux the day after I gave my address. My transaction with them was very smooth and fast.  When I open the box, it contains 8 vials of glutathione, vitamin C beauty shots plus an oral booster to maintain high levels of glutathione in the body. If you don’t know how to inject it to your veins, you can visit their shop located at Unit 3 G/f Eight one Eight Bldg.., 818 A Arnaiz Avenue San Lorenzo Makati City from 9am-6pm (Monday-Friday). They also have affordable packages for Gluta drip. I started intaking their glutathone booster capsule (once a day) and injecting 1 vial of 600mg of their pure glutathione together with 1000mg of vitamin C every 3 days. My nurse adviced me that it would be better to inject 1 vial of glutathione since the vitamin C is already 1000mg to avoid wastage. After the first session, I saw my fist becomes whiter. I was thinking maybe it's because of the high dosage of vitamin C or the glutathione booster that I'm taking everyday. The best about its result is my neighbors, relatives and friends are noticing the changes in my complexion. They're telling me that I'm blooming and my skin becomes fairer. The dark spots on my upper arms lighten and I don't easily get coughs and colds because of the high dosage of its vitamin C.

So what's next for me after trying these products? Since GSH gave me the best results among these three, I'll continue using it but this time I'm going to try the GSH Ultima 1500 from Magic Potions Online Beauty and Wellness for 2,300 pesos. I'll write a different blog for this after 2 months for the result. 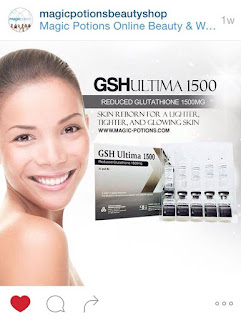 This blog is all about my thoughts, ideas and feelings.
I don't give an opinion to the situation that I'm not familiar with. Everyone's welcome, so feel free to explore my page. Enjoy!