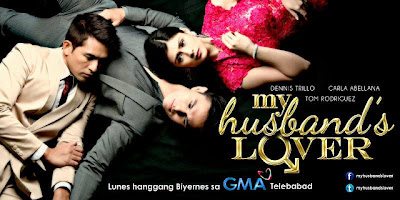 GMA 7 is really brave enough to produce a gay-themed story such as MHL. In a Christian country like here in the Philippines, same sex relationship is still unaccepted. Our nation tries to hide this kind of issue but you can't escape the fact that third sex community exists. They can be a part of your family, friends or co-workers. But this issue that they tried to hide will happen to be one of the most successful teleseryes of this generation.

"From Twitter @DirekJoey: Kudos should be given to GMA-7 for taking a risk & giving a fresh take on the tired templates of the telenovelas for something new."

Netizens rare over this especially during its pilot episode. It has trended on Twitter 'Philippines' with a hashtag, #MyHusbandsLoverPilot. It was very overwhelming that the Filipinos love watching it. No wonder because this is the first time that a teleserye will feature a gay couple in the main story. GMA 7 went out of the box and really experimented with this.

"My Husbands Lover shows that love exists in myriad forms."

Lally Agatep - Soriano played by the most sought actress Carla Abellana is the loving wife of Vincent played by Tom Rodriguez. Lally has been married for ten years and she tried to be a perfect wife but Eric played by Dennis Trillo came out of the seen. He is Vincent's first love and happens to be the architect of their dream house. How will Lally accept the fact that she's not the only one in her husband's heart and her rival is a guy?

This teleserye also shows gender equality, that true love really exists between same sex. They convey a message to the audience that it's just a matter of openness and respect.

As a viewer of MHL, I recommend you guys to watch this especially if you want to see different and unique drama. There are still more revelations to come. Will Lally give up on Vincent? Who will Vincent choose? Find out by watching My Husband’s Lover on GMA Telebabad.

This blog is all about my thoughts, ideas and feelings.
I don't give an opinion to the situation that I'm not familiar with. Everyone's welcome, so feel free to explore my page. Enjoy!